A deep card game about Elements and Avatars where the number of choices every turn is way bigger than what you can count. 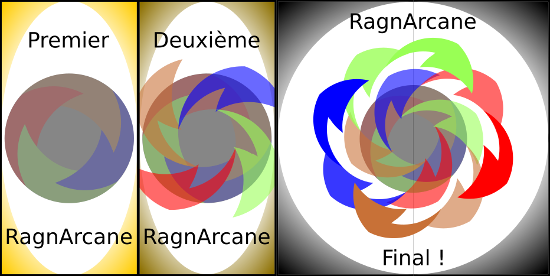 A deep card game about Elements and Avatars where the number of choices every turn is way bigger than what you can count.

I love HearthStone, I love Magic, I love strategic card games!
So I made my own. 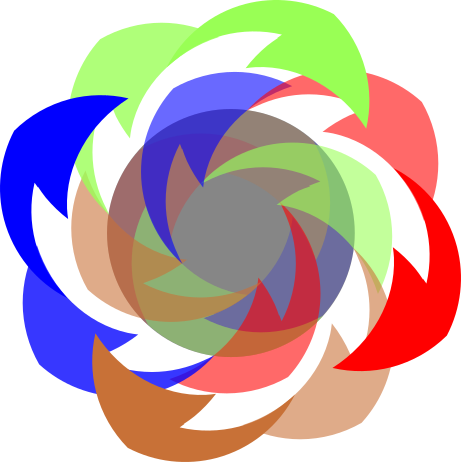 Here is it, the RagnArcane.
It's also nammed, the God Apocalypse !

A Card Game, for the first time !

If I want to make sensation, my game has to be unique, so I needed to experiment all the possibilities that offer a card game.
Why do we draw one card at the beginning of our turn ?
Why we always wins by reducing some life total to 0 ?
Why do we intensively use numbers ?
Why don't we use events instead ?
Soooooo many question I wonder.
And I anwsered them.

Some cards of the game!

Feel free to only read sections that interest you ;)

A game of choice. A game of skill.

If I wanted to reach the level of intense reflexion that collectible games have, I had to be smart.
Because I will lack something fondamental, something attaching, something emotionnal, something that will make the player say "It's me who did it !". I will lack all the DeckBuilding part !
For this reason, if all the cards were static, all the games would look alike. Cards had to be dynamic. They had to offer some choice for the player. That's why, on every card, we can choose between 3 differents effects !
And this, is what bring the most diversity to this game. 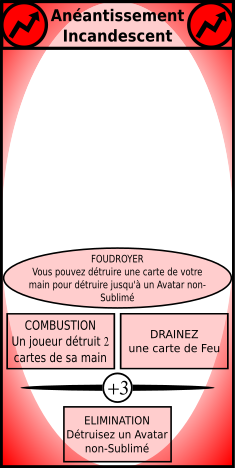 A typical Fire card!
But they are all differents! 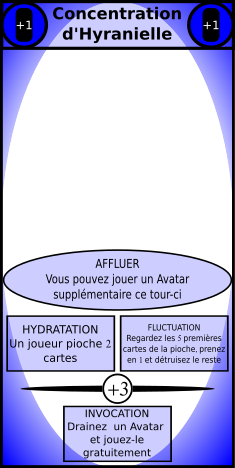 Kind of it's Water opposite!
And still not symetrical ;)

Or at least, feel that they could have win.

In order to achieve that goal, I wanted that each card could look like a game breaking card. I wanted to put power in each of them. However, this is dangerous, the game will be unbalanced quickly with this strategy. So I had to lock this power behind conditions.
My final objectiv is that at the end of the game, all players are happy because they made good plays, even if they could have win.

I wanted to create an unique and different experience in each and every game.
So I had to create several strategies : here come the elements ! There are 4 : Fire, Water, Air, Earth. And each one have his own strategy to lead the player to victory.
I applied myself to create unique, simple and intuitive strategies for each elements that could define their identity !
In this way, players can sentimentaly attach themselves to a part of the game and feel like incarnate the will of the game.

Because. That's the most common and easy answer.
But I am not satisfied.
I want to test, I want to prove, I want to show that's it's the best thing to do.
And so I tried. But every time I fall back to the numbers field. The reason ? It's a soooooooo powerful tool to help the Game Designer to balance his game. And it help showing the power of an action.
And even if we don't want number in our game, there are here anyway : we are X players, we have Y cards in hand, there are Z turns !
However, I succeed in making diverse win-conditions (still number-based !) that could fluctuate over the game !

Why does creatures stay on the board ?

Yes, why ?
Because they create a state of the game. They help situate who is ahead, who is behind. They help visualise the next few turn.
They construct the Strategy of the game. They make all his depth !
In order to achieve the same goal, I had creat two type of cards, the Avatars thay give a permanent advantage, and the Arcanes (or the spells) that create quick and powerful advantages ! 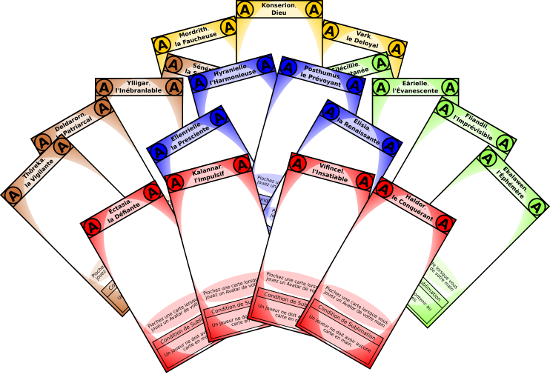 Say "Hello!" to the Avatars!

As we don't like playing parallel games (we could both do it at home), it's primordial that my opponent can disrupt my plays !
To achieve that, I made 3 things :
- the opportunity to counter opponents spells with any card but at a big cost - if a player is countered, he is frustrated ! So he can play another spell. For free ! - each spell effect have an opposite spell effect that can balance him !

When does the game finish ?

I learn in my early test that it was really important that everybody finish the game at the same time. At least if we want everyone to enjoy the game ... !
Soooo, the game finish at a precise moment, and we compare the situation of each player. The one with the better one (the most Avatars) wins ! In that way, everyone stay focused until the last minute of the game.
And when the game finish ? When a special card, the RagnArcane, is drawn for the 3rd time ! Because yes, dead cards go under the deck so that the deck cycle automatically ! And yes, the deck is common to all players ! I am sorry I can't explain everything here, I just expose my design thought.
Thanks to this mecanism, everyone can see how far we are from the end of the game, and they can even try to speed it up or slow it down for their own interest ! :D

Why do we draw an unique card at the beginning of our turn ?

This is a very important question and I tried several version of drawing step before feeling satisfied of one of them. In fact I didn't want to use the classical "draw one at the beginning of your turn" !

Why at least one at the beginning ?
Because we need to fill our hand to play every turn.
Because it add a random part to the game. Which add fun.
Because it offer a new opportunity each turn.

WoW ! This was (and is !) the real difficulty of this game.
To achieve it, I made a lot patches (more than 15), and I question myself everytime to understand if what I am doing is the right thing to do. And it often wasn't ! But it's by making mistakes that we learn.
I am also simplifying my game all the time. I even reduced my game to the Minimal Viable Product (MVP) in order to extract the core of the game. 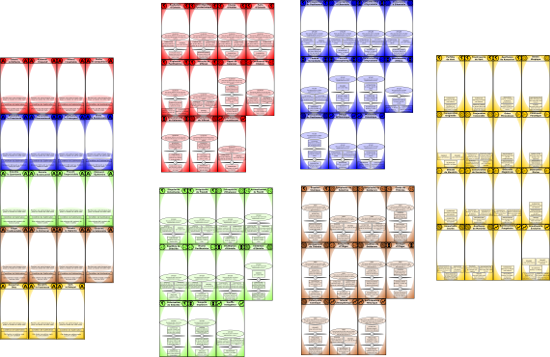